Recently a friend of mine was told some of the worst news possible about the state of his home – it was infested with termites. The news came as a great shock, as he had only put off having a pest inspection six months or so beyond his usual annual inspection.

This complacency cost him dearly. A subsequent inspection discovered termites in a number of rooms of the house. This was despite the main part of the home being a cavity, double brick house with only a small extension at the back with timber wall studs & gyprock sheeting.

So, how did it happen?

Good question. The home is an inner-city Newcastle, 1920s Federation-style home. But it was in good, renovated condition.

The pest inspector found a large nest infesting a paperbark tree at the front of a neighbour’s home.  In his opinion the termites had made their way underground directly beneath the home where they surfaced in the diagonally opposite corner of the house, beneath the laundry. Why here, the homeowner asked the technician? He thought the combination of a corroded downpipe and a hot water system outside the laundry meant a large amount of water sat under the house after heavy rain. This damp in the earth beneath the laundry attracted the termites, who began to eat their way up and into the only gyprock wall in the house.

Sections of that one gyprock wall were reduced to little more than paint in a matter of months. Looking at the wall it was difficult to see the damage, but you could poke a finger through parts of it with ease. Once sturdy skirting boards could now be pulled apart with the jab of a screwdriver.

From there some termites made their way into adjacent rooms along the wooden skirting boards and picture rails. Fortunately the damage was limited given that most of the walls within the house were constructed of brick and of no interest to the termites. If the termites had entered a home constructed of a timber frame & all gyprock walls the damage would have been far worse.

The pest inspectors were only called when one of his children pointed out a small nest in the corner of her room, a little like an ant’s nest. Not really expecting it to be termites, he nevertheless realised he was overdue for an inspection and booked it in. The technician immediately suspected the worst, which was soon proven when the aggressive white insects were discovered when the first hole was poked in the wall.

Something my friend didn’t realise was the sound termites made. When disturbed by the technician the ‘clicking’ noise of the annoyed colony could be heard from across the room.

Some termites will move more quickly than others through your home. There are some species who will very quickly eat away a large portion of your home, so regular inspections are a must. A matter of months can make a big difference.

Home insurance did not cover vermin damage unfortunately and the tree with the original nest of termites was on council land. Council considered the termites a ‘natural occurrence’ and their action was limited to an assessment of the trees at the front of homes along the street for structural damage.

My friend has since had the termites treated – a fine dust was applied directly to the visible insects in the wall which was taken back to the colony and spread amongst all those living there. But the damage had been done. Part of the gyprock wall, some skirting boards and picture rails need to be replaced, then painted. Corroded downpipes need to be replaced to keep the damp at bay.

It turned out to be a costly experience for my friend, but it could have been much worse and he has vowed never to miss an annual pest inspection again. Not only that, he plans on being more proactive with maintenance around the property. If the downpipes had been in better condition, perhaps the damp would have been less of an issue and the termites may not have found the entrance to the house so attractive.

If you need to find a builder to repair termite damage on your property in Newcastle, Lake Macquarie, Maitland, Cessnock or Port Stephens visit www.buildlocal.com.au.

Do You Really Need Pest & Building Reports Before Buying a House?

Buying a home is a major expense – it is probably the biggest investment most of us will ever make. On top of that, you will find yourself spending money on everything from conveyancing to real estate agents and perhaps thinking – do I really need to get the pest and building inspections done?

The short answer is yes! Don’t scrimp on these inspections. The costs are minor in comparison to other expenses involved in buying a new home, and can save you thousands in the long run. 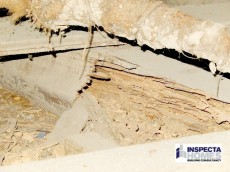 Termite infestations can go undetected for months, or even years, and the cost of ridding your home of these tiny invaders can often set you back thousands of dollars. Before buying a new home it is certainly worth getting a comprehensive pest inspection done for your own peace of mind.

A home may look wonderful when you walk through it on inspection day. However, a simple walk through isn’t enough to tell you if a home is structurally sound. A pre-purchase or pre-sale building report is a written account of the visual condition of the property at the time of inspection. It is non-invasive, performed and prepared within the Australian Standards and Workcover Safety restrictions and guidelines. 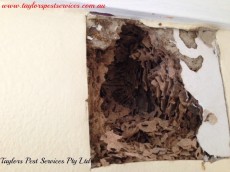 A building report may also provide valuable information to help you negotiate the purchase price. If you are the vendor, it can be worth doing to put a potential buyer’s mind at ease.

Is your balcony safe – has it been inspected for wood rot or termite damage?

Now that the weather is warming up it’s a great time to take a good look at your outdoor entertaining spaces and in particular your deck or balcony areas to ensure that they are in good condition and are safe to handle larger than usual loads during the upcoming summer and festive season.

Decks or balconies constructed in the 1970’s – 1990’s are most at risk of timber rot and should be regularly inspected for any signs of termite damage.  There have been many cases of serious injuries and deaths relating to structures failing over the years. Wood rot or termite damage can go un-noticed by property owners and accidents can occur from something as simple as a screw becoming loose on a handrail or balustrade.

Older decks which were commonly constructed from untreated pine or Oregon timber are more susceptible to wet rot and will require regular maintenance or may need replacing. If you are unsure as to whether your deck or balcony is safe for use, you should always seek the assistance of a qualified building professional who will inspect the area and deem it safe or advise you of any issues that need to be addressed.

If you notice any soft spongy areas when you walk on the deck that is a good sign that there is a problem and you should stay off the area until a professional has inspected it.  You may also be able to see damage at the ends of the timber, at joins or on exposed edges.  Bolts and screws should always be secure and in good condition without rust and you should always check the posts and base of the deck if you can access it for signs of rot.  Posts should never go straight into the ground without a metal bracket and foot attached to a concrete footing because water can pool around the ground near the posts and cause moisture damage.

If your deck or balcony has been well built, constructed out of appropriate materials and well maintained you should expect to get 20+ years of use from it before it needs replacing.  It is advisable to coat your timber deck annually with a decking paint, oil or stain to help prolong the lifespan of the timber.

Concrete balconies can also be cause for concern if they have not been constructed using the appropriate building methods and if water pools regularly on your balcony or tiles are lifting you should contact a building professional to put your mind at ease.

Regular maintenance will ensure that you get many extended years of use out of these outdoor spaces and will more importantly keep your family and visitors safe.

If your deck is more than 20 years old or you have any cause for concern, then it is time to give Living Renovations a call on 0416 128 485 so that Rex can put your mind at ease or start work on any necessary maintenance so that you are ready for the summer bbq’s and festive season of entertaining ahead!